It’s beeeeeaaaach time! We had just started out trip two months ago but we could not wait for some beach time! Away from tourists and all the city noise. We wanted to spend a week free from moving around and rushing. We decided that El Nido would be the place to do that (thank you CNN).

We booked our flight with Cebu Pacific Air to fly from Manila to Puerto Princesa.  There is an airport in El Nido operated by ITI Air, which belongs to El Nido Resorts, we had to do reservations by email and from what we read online, it is pricier and you are not always sure to get a reply .

From Palawan to El Nido, the ride takes 8-9hrs in public transportation. You can share a van with other travelers, which would cost more but would reduce traveling time to 6hrs.

We originally opted for public transportation, (this blog post helped a lot, thank you James!) but after getting on our tricycle, the driver sold us on a van (where he would, of course, get a commission for bringing in two tourists) so that we would get to El Nido earlier in the evening. We negotiated the fare down to 600PHP from 800PHP (USD $15 instead of $20) per person.  We hoped in a van packed with other tourists and were on our way to El Nido. We made a stop for lunch halfway and got to El Nido around 5pm, just enough time to find a place to stay and get to the beach before sunset. We decided to stay on Corong Corong because J read that we could not see the sun set from El Nido – where all the hotels and tourists are located on the beach. We stayed one night at A Place to Remember El Nido and moved over to Plankton Diver’s Inn the following morning. We wanted a hotel beachfront, which was quiet and relaxing. We found our dream hotel in Plankton Diver’s Inn. When we arrived, only the top floor was ready while the bottom floor was still under construction. We were the only ones there and stayed for a week for 800PHP per night (USD $20) after negotiations. It was the perfect setting. We were far enough from the crowds to have a peaceful stay.

Getting coconuts (and posing) from the tree next to our room

Some things to note, there is no electricity in El Nido until 2pm in the afternoon until about 6am the next morning. Some hotels have generators but the rooms are pricier. There are also no ATMs or banks in El Nido.

We would go up to El Nido Town at night for dinner on the beach and during the day we would soak up the sun and enjoy the peace and quiet of the island. A tricycle ride from Corong Corong to El Nido Town cost roughly 30 PHP (<USD$1) after negotiations for the two of us.

Close to our hotel, we ate at Island Front Cottage and Restaurant where we also booked our island hopping day. We had a day of fun when us two and two Australian girls got together for a day of snorkeling and visiting the other islands. Truly magical! A real must must while in El Nido. We chose a combo between A and C, snorkeled, had a delicious lunch prepared for us, visited the lagoons and made two friends. A very memorable day, the clarity of the water was breathtaking! But…there are a lot of tourists so you will run into other boats doing exactly the same thing you are doing… We paid 1,100PHP per person for the entire day with snorkeling equipment and lunch included.  Make sure you request to see the big and small lagoon early in the morning, we got there late in the afternoon so there was not much sun left – the views were still impressive but it probably would have been even more spectacular if it were sunny.

Meals in El Nido cost about 400-800PHP a plate for, most of the time, grilled fish (really tasty) and veggie sides or Filippino dishes with rice. There is no real nightlife in El Nido, even at night, the beach was pretty quiet and candles everywhere but no bars with loud music overtaking the peaceful atmosphere.

Dinner on the beach at El Nido Town

El Nido was a delight, we really fell in love with the place, a real treat and a well-deserved rest after two months of traveling to four countries. We were tempted to go to Sabang for the World Unesco Heritage site of the underground river but after much research and discussions with other travelers, we decided not to go, Sabang was not really on our way back to Puerto Princesa, the activity was pricey between permits and guide tours, and other travelers did not seem to be raving about the cave.

We took a night bus, booked at the bus station for 483PHP per person (about USD $11), and headed towards Puerto Princesa where we could spend a day and a night before our flight back to Manila.

What did you do while in El Nido? Share your experience and adventures on this beautiful island! 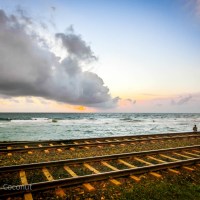 {"timed-popup-delay":15,"cookie-duration":10,"popup-selector":"#popup-box-sxzw-1","popup-class":"popupally-opened-sxzw-1","cookie-name":"popupally-cookie-1","close-trigger":".popup-click-close-trigger-1"}
Get free weekly travel updates directly in your inbox

Join a community of over 10,000 people! Get Rolling Coconut's newsletter by OOAworld Travel including: Travel Tips, Photos, and Videos, Stories!
Your information will *never* be shared or sold to a 3rd party.
{"enable-exit-intent-popup":"true","cookie-duration":1,"popup-selector":"#popup-box-sxzw-2","popup-class":"popupally-opened-sxzw-2","cookie-name":"popupally-cookie-2","close-trigger":".popup-click-close-trigger-2"}
Leaving us already?

Sign up to receive a weekly update on our travel adventures by OOAworld Travel! See you soon!
Your information will *never* be shared or sold to a 3rd party.